FIFA 21: What Edition Should I Buy? —— Detailed Instructions on how to pass the first minefield of EA ( 2 )

Today we mainly analyze the following items and the price, so that it will be more accurate for us to know the value of the three editions and make the choice.

Firstly let’s compare Standard Edition with Champion Edition. In the first week, for the two editions, you could get 1 FUT pack alike. So the essential difference is early access only.

1, 2020, even 5 days earlier than Champions Edition and Ultimate Edition. Thus, why not just spend $4.99 to join EA access membership for 1 month only? You could not only enjoy 10 hours to play FIFA 21 much earlier than others, but also save $1-5 to buy the game.

Let’s get back to compare Standard and Champions. So far it is still a bit hard to confirm which one is more cost-effective as we cannot confirm the value difference between $20 and three days early access.

Gamer A and Gamer B have a budget of $80 each, and both join in EA Membership. Gamer A orders Standard Edition and spends the rest $20 on points, equal to 14 x 7500 packs; according to the pricing and statistics in FIFA 20, Gamer A could get 32606 coins from the packs. And in the 10 hours access from EA membership, Gamer A could reach Level 3-5 of Division Rivals to get the rewards of 32000 coins. Thus, Gamer A could get 64606 coins in total.

While Gamer B orders Champions, but have no more money for FUT packs. And we are not sure if Gamer B could earn more coins during the three day of early access. But in the three days, it is assumed that Gamer B reaches DR Level 5 to get the rewards of 58000 coins, which should be the highest rewards from the game now.

But pitifully, Gamer B with Champion Edition still gains less than Gamer A although Gamer B has spent much more time on the game. In this comparison, many other aspects such as Squad Battles, transactions are not taken into account; otherwise, Gamer A may be able to get even more. To sum up, Gamer A with Standard Edition prevails. Standard Edition plus points is more effective than Champions Edition.

if it is more cost-effective than Standard Edition.

In this way, when FIFA 21 is officially released on Oct. 9, Gamer A will own over 40K coins more than Gamer C may have 1 more Untradeable FUT 21 Ones to Watch Item, which is worth or not, it depends on which player to get. 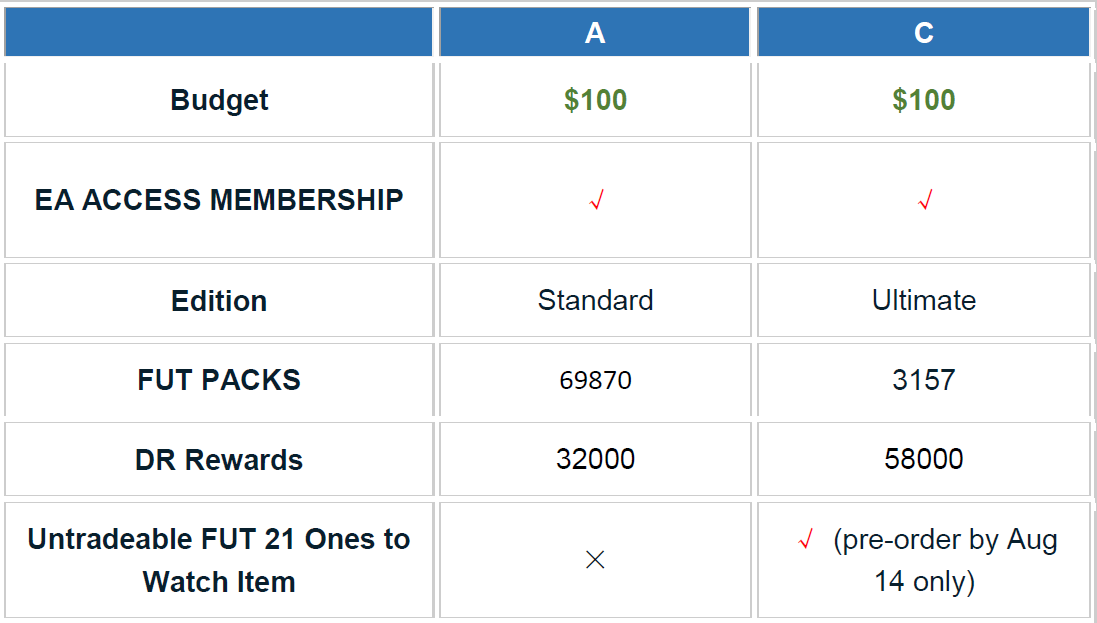 So, from the analysis above on the three editions of FIFA 21, do you know what edition should we buy?

Previous: FIFA 21: What Edition Should I Buy? —— Detailed Instructions on how to pass the first minefield of EA
Next: Winners Announcement: Play Interesting Quizzes & Collect Free Coins